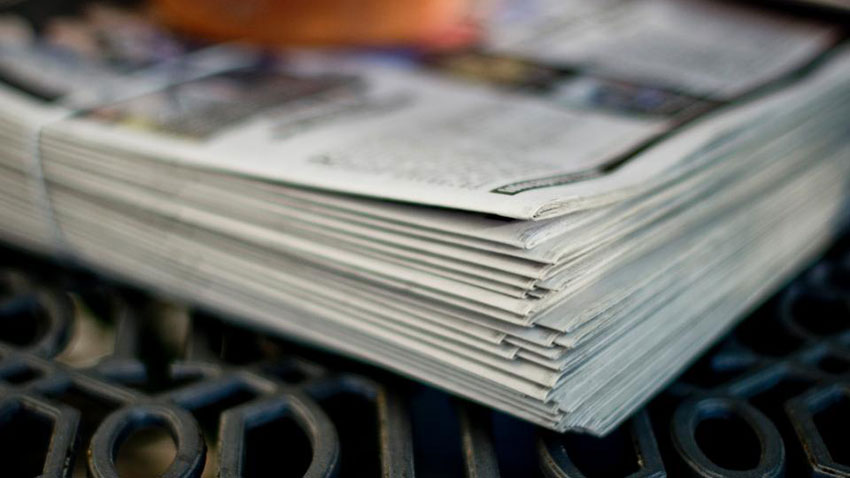 Although some people think of “fake news” as information that someone doesn’t agree with, the truth is, what we are calling “fake news” has existed for centuries. It just went by different names: gossip, rumor, hoax, or conspiracy theory.

So that’s a first point: “fake news” has a long history in the U.S., to say nothing of propaganda wars that have been waged worldwide for at least as long. And the facticity of claims has been called into question at least from the beginning of Western civilization, when the Ancient Greek legal system was established to defend against false charges.

But thinking more recently, we have to examine the pervasiveness of fake news in our own time. Even when the reliability of information was not questioned, people still doubted the veracity of claims. My own grandmother, for example, never believed that Neil Armstrong walked on the moon.

And a possible explanation for the proliferation of “fake news” is that postmodernism has ushered in a relativism that questions whether any objective truth exists and holds that all truth is relative.

If such a mentality reaches critical mass, it calls into question even the most verifiable information or objective facts, because even the idea of “objectivity” is viewed with skepticism or suspected as imposed from, say, officials or privileged classes.

So, in some sense, we can think of the pervasive suspicion of all factual claims as the fruit of the relativistic culture we live in.

What are some of the consequences of doubting the reliability of news and information that is distinct for our times?

In order for freedom of the press to function as a check and balance to lawmakers and governments, we have to rely on information to be truthful. The major function of a free press is to reveal true information.

The threat to democracy is not the only serious harm that could befall us if fake news prevails. There is also the possibility that someone inflicted with insanity could act on fake news and inflict serious harm. Take the recent case of the fake news of an international child enslavement ring that former presidential candidate Hillary Clinton was running in a pizza restaurant in Washington. A tweet fed that bogus conspiracy theory, which ultimately led to a shooting in the District of Columbia.

Fake news can lead to political confusion and exploitation as well. For example, United States Representatives Nancy Pelosi and Elijah Cummins cited a fake news tweet from General Michael Flynn alleging he was used as a political scapegoat. The tweet, as it turns out, was not General Flynn’s actual Twitter account but was, instead, a parody of it. The fraudulent tweet managed to harm the reputations of Flynn, Pelosi and Cummins.

But why the proliferation of fake news today? One major factor in the spread of fake news today is the fact that we live in a digital world. Today any citizen can be a producer and distributor of information—be it true or false. No formal training in journalism or in information ethics is required. Virtually anyone can issue false information and even do so under the guise of a publishing outlet that attempts to mimic legitimate sources of information. And since almost everyone has access to social media, the field is wide open for abuse. Ease of exploitation is a decisive factor.

At the same time, more and more news outlets are increasing. This strengthens democracy as it empowers citizens with their own means of expressing their voice, but it also complicates the ability of consumers to sort out reliable postings of information. Technology can serve as an accomplice in spreading unfiltered and unchecked lies. Additionally, distrust in the media continues to rise.

A similar blend occurs between information and entertainment, or “infotainment.” Information loses some of its sober realism when cloaked with music, flashy lights and other production values. So much of late night comedy presents current issues to us on a stage with guest celebrities in front of spirited audiences. This can have the effect of causing us to laugh as we consume information about significant issues and result in what Neil Postman called “amusing ourselves to death.”

What can we do about it?

A main recommendation is to develop media literacy. California State University, Chico, developed a set of questions to aid in evaluating information. The sniff-test questions, adopting the somewhat direct acronym of CRAAP, consist of the following, as I have abbreviated them:

Currency: Is the information up-to-date? Has more recent information been revised or posted?

Relevance: Does the information relate to the topic of information you were investigating?

Authority: Who is the source of the information? What are the authority’s credentials for writing or reporting on the topic? Is information about the source transparent?

Purpose: Do the authors make their intentions or purposes clear? Does the point of view appear objective and impartial? Are there political, ideological, cultural, religious, institutional or personal biases?

Another suggestion, when bias is generally assumed of a news source, is to subscribe or seek out news from sources with opposing biases. The principle here is the Latin one, Virtus in media stat, or “virtue stands in the middle.” This could help in acquiring a more complete picture.

Dennis Cali is professor and chair of the Department of Communication at the University of Texas at Tyler.