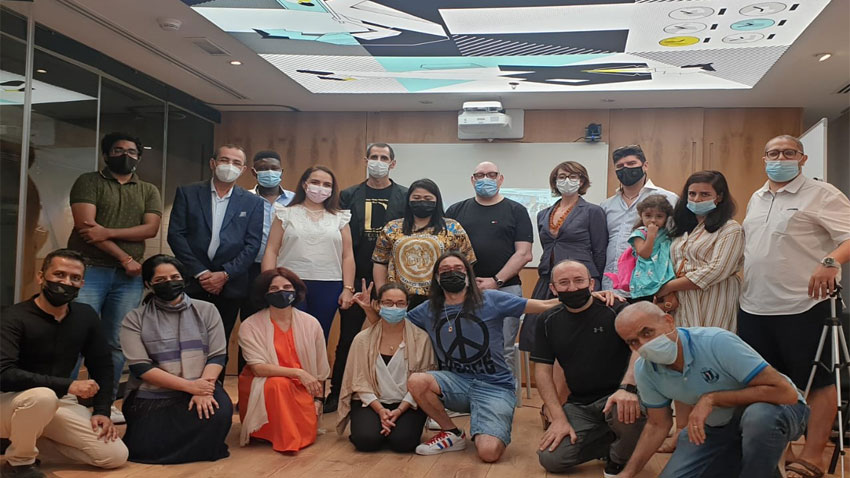 In view of the meeting with Pope Francis in Assisi in the autumn of 2022, 2 october 2021 was the second appointment for young entrepreneurs, economists and change makers from the five continents, who met contemporaneously to share pathways and create partnerships.
Poverty, economy, work, ecology, and enterprise are the main themes of the program enriched by the language of poetry and spirituality because – echoing the words of Pope Francis – “it is impossible to engage in great affairs only from a theoretical or individual perspective without a spirit that animates you, without certain inner motivations that give meaning, and without a sense of belonging and rootedness that gives breadth to personal and community action.”
Over 30 cities worldwide hosted the EoF event, and thousands of events were organized all over the world, one of them was in the united Arab Emirates UAE.
The event was connected from Dubai “LIVE and ON LINE” with the “MAIN EVENT” of Assisi. 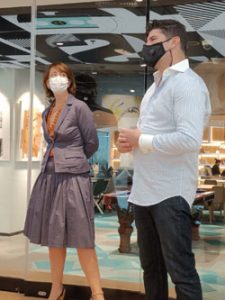 Building a NEW Economy and Looking for: People, Planet and Profits.
People: Better leaders for a better economy
Planet: More respect and responsibility for a better world
Profit: more financial awareness for a new economy

Many panelists were invited to talk and share their experiences:
∗Elena Buriani and Luca Atti (couple from Italy), are the CEO and founders of “LEA growing people” based in Dubai. The purpose of the company is to make profits by making the world a better place to live. Through coaching they aim to improve people’s lives such as self esteem, time management, and how to coexist with the nature.
∗Edurne Gil (Spain) is the Coordinator of Water Alliance UAE, an NGO registered in the UAE which provides courses for school students on how to preserve water and not waste it. She also works for DEWA (Dubai Water and Electricity Authority) by training the staff there on the same topic and doing researches to help saving water.
∗Murtaza Balasinorwala (India), he’s a businessman who owns joinery “Al Noor inter Design A.N.I.D”, and produces wonderful furniture. He purchases his wood only from certified suppliers which respect the nature and are committed to build new trees every time they cut one.
∗Diego Javier Carranza (Argentina). He is a businessman who founded “In versions Dubai” in order to attract investors from Latin America to Dubai. His aim is to make profits and at the same time train investors on how to do business in a way that respects the planet, people and all the community. 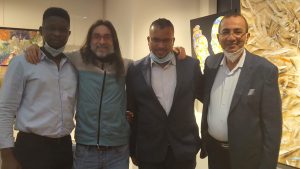 Daphne Soares (Pakistan) is a coach which helps women on how to open their own businesses and also how to find the right life-work balance. She works mostly with working moms. She won several awards as a coach.
∗Abdullah Al Atrash is the moderator of the event and of also the coordinator of the Economy of Francesco in the U.A.E. He is an italian-syrian national which considers himself a citizen of the world. He practiced as a Manager the Economy of Communion for the last 20 years in a Paint Company, MAS Paints, based in the UAE, sharing profits with all the 200 plus employees and their families.
The people there represented a wide part of the local society such as: businessmen, workers, ladies, men, students, and middle aged people. Muslims, Christians and Hindus, Africans, Europeans, Arabs, Indians, Pakistanis, Filipinos, people from different backgrounds and cultures but with the same aim: to live peacefully, making the world a better place and building a new economy of communion in the UAE.

All were very interactive asking a lot of questions and offering their opinions on how it’s possible to build a new economy of communion. We learned, not only through moments of discussion and sharing, but also by playing, how much water is wasted every time we want to manufacture a pair of jeans, when we take a shower, when we flush our toilets, brush our teeth, produce a hamburger, and many others models of life.
At the end of the event, Pope Francis delivered his speech, everyone really enjoyed and appreciated what he said. Among his words: “We often forget the importance of human cooperation and global solidarity; we also often forget the existence of a responsible reciprocal relationship between us and nature. The Earth precedes us and was given to us, and this is a key element in our relationship with the goods of the Earth and therefore a fundamental premise for our economic systems. We are stewards of the goods, not masters. (…) Finally, it also reminds us that, immersed in a common sea, we must embrace the need for a new fraternity. This is a propitious time to become aware again that we need each other, that we have a responsibility towards each other and towards the world. The quality of the development of people and of the earth depends above all on our common assets; therefore we must seek new ways to regenerate the economy in the post Covis 19 age”.
Abdullah concluded: “We had a very precious and important time but before leaving we networked to be in touch and build together our community, such as we did during our meeting”.